Cat Found Outside as a Stray Decides to Look After 10 Kittens, Some of - Captain Catnip

Cat Found Outside as a Stray Decides to Look After 10 Kittens, Some of Which Are Not Her Own 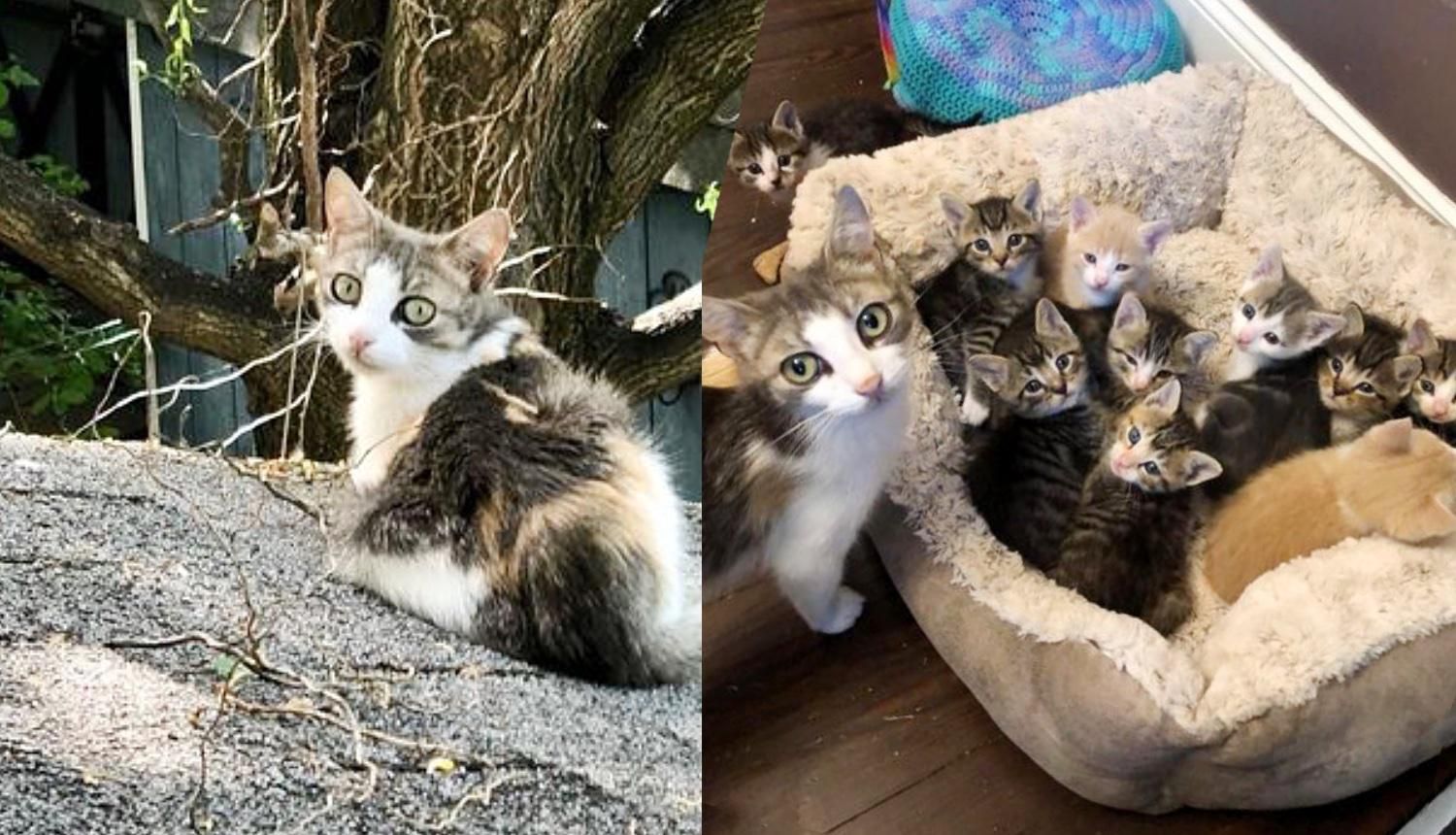 A cat who was found outside as a stray, decided to look after 10 kittens, some of which were not her own. 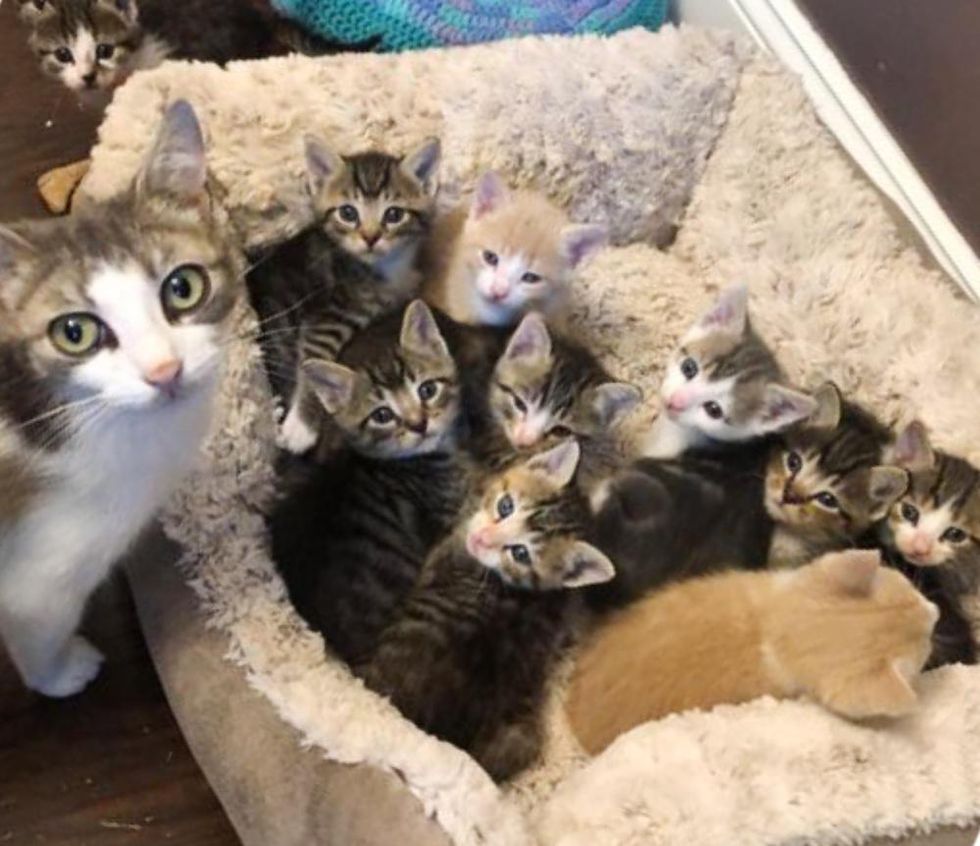 Macy the cat and her 10 kittens@purrs_in_paradise

A stray cat named Macy was found with her week-old babies. When they were brought to safety, another litter of kittens were rescued and needing help.

The mother of the second litter was nowhere to be found, so the finder placed the kittens with Macy, and hoped she would accept them. Without hesitation, the sweet calico took them in with open arms, and started nursing and caring for them as her own.

"She was a mother to two litters of kittens combined, for a total of 10 kittens," Wilma, who volunteers for the Humane League of Lancaster (in Pennsylvania), told Love Meow. 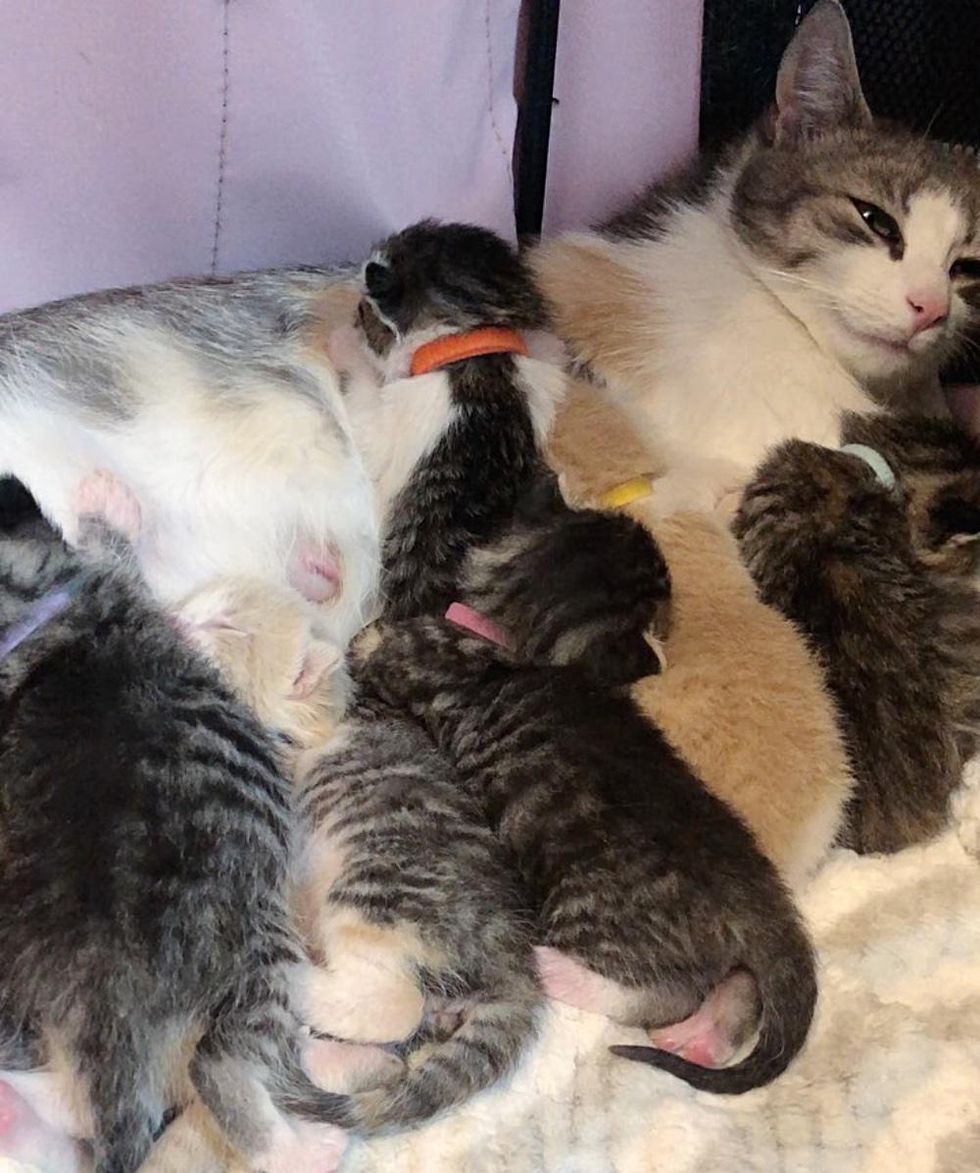 Wilma took all 11 of them into her care, so Macy could have a comfortable place to raise her kittens and get the help she needed.

The friendly stray quickly warmed up to her foster mom, and started enjoying the perks of indoor life. "It didn't take long for her sweet cuddly personality to shine through, and she accepted my help with her babies." 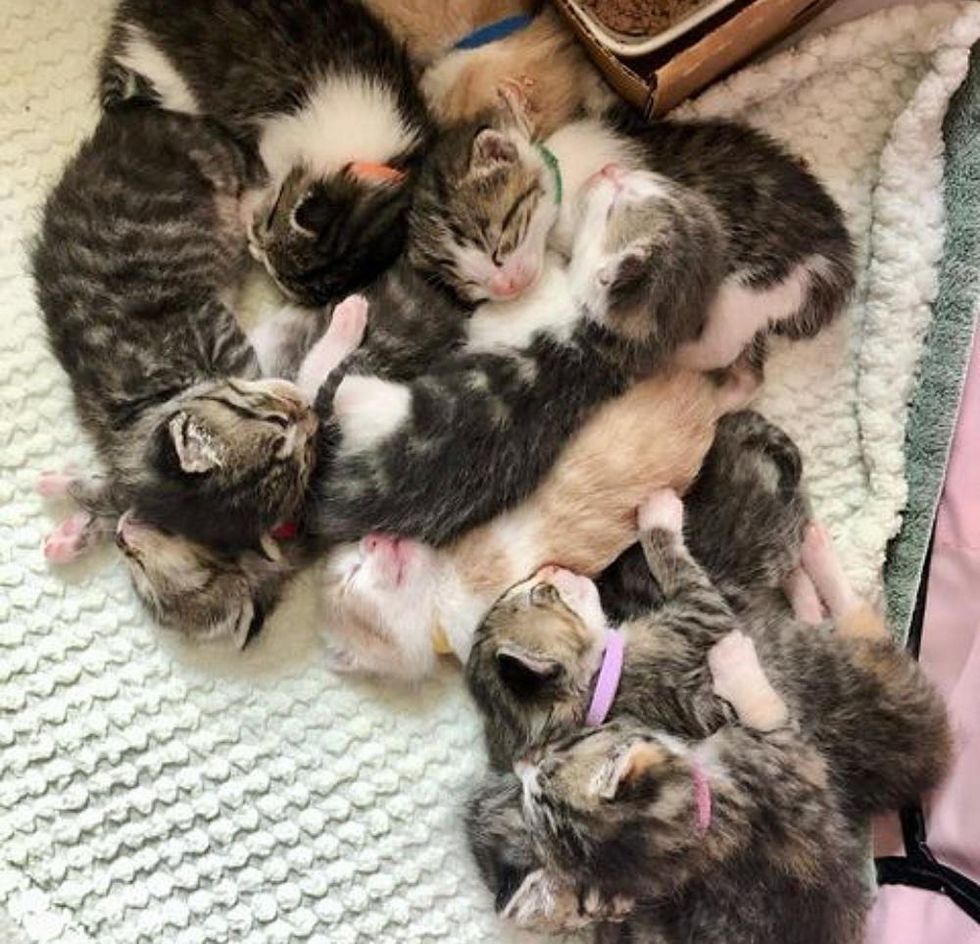 Macy had her paws full with 10 hungry mouths to feed, and rarely left their side for the first couple of weeks. She catered to their every whim, and if one of them started crying, she would tend to them immediately and shower them with licks.

Macy continued to do a phenomenal job, making sure that her babies were clean from head to tail, and that they never went to sleep with an empty stomach. Wilma worked alongside the momma to supplement the kittens twice a day. 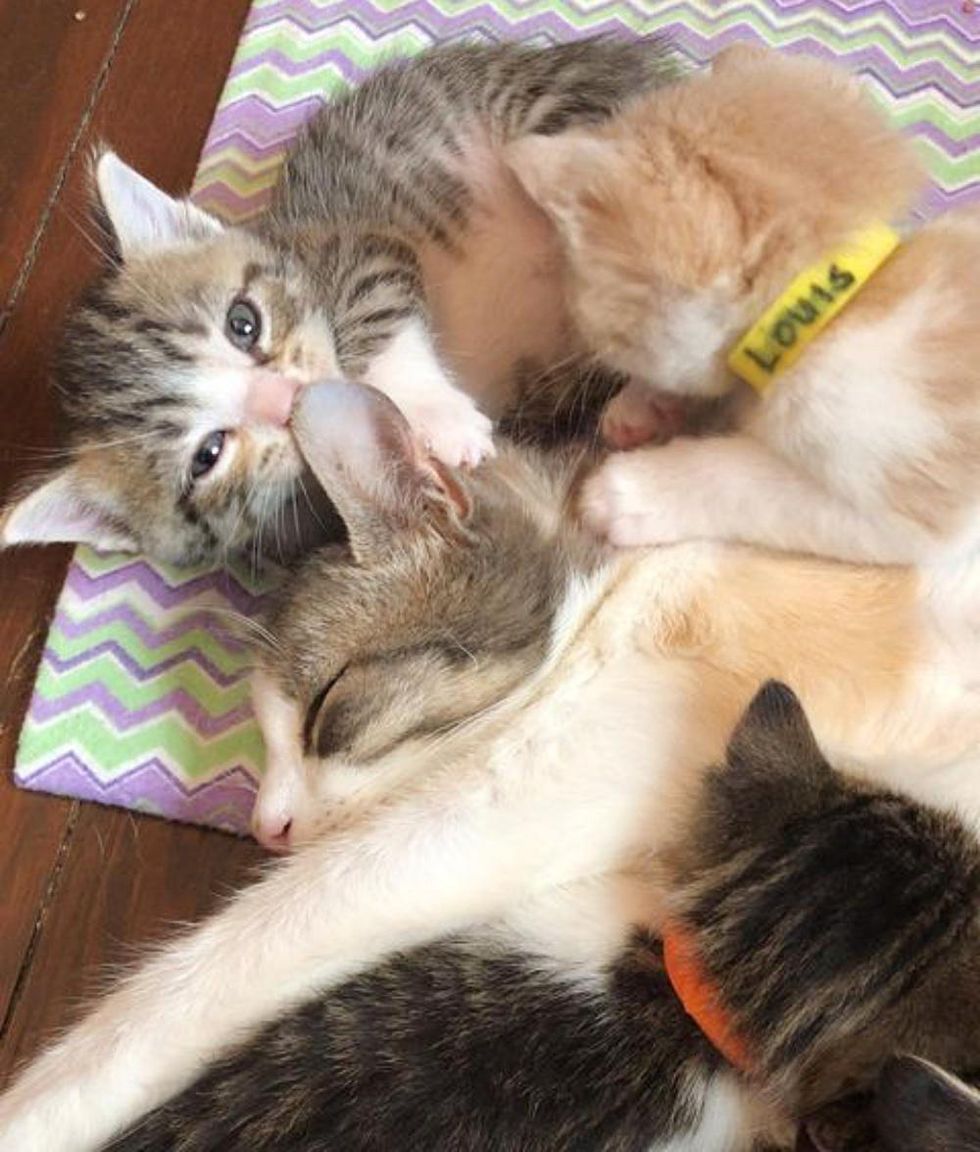 At five weeks old, the kittens already ventured out of their comfy nest and became inquisitive and mischievous young'uns. They figured out the litter boxes with flying colors, and learned to eat on their own with lots of encouragement from Wilma and Macy.

Watch Macy and her kittens in this cute video:

Cat mother and her 10 kittens www.youtube.com

The kittens unleashed their new-found energy at toys, and honed their wrestling prowess with one another, including Macy's tail.

In the morning, Wilma entered the foster room to a stampede of kittens swirling around her feet, screaming for breakfast, while Macy snuggled up to her, cooing for attention and pets. 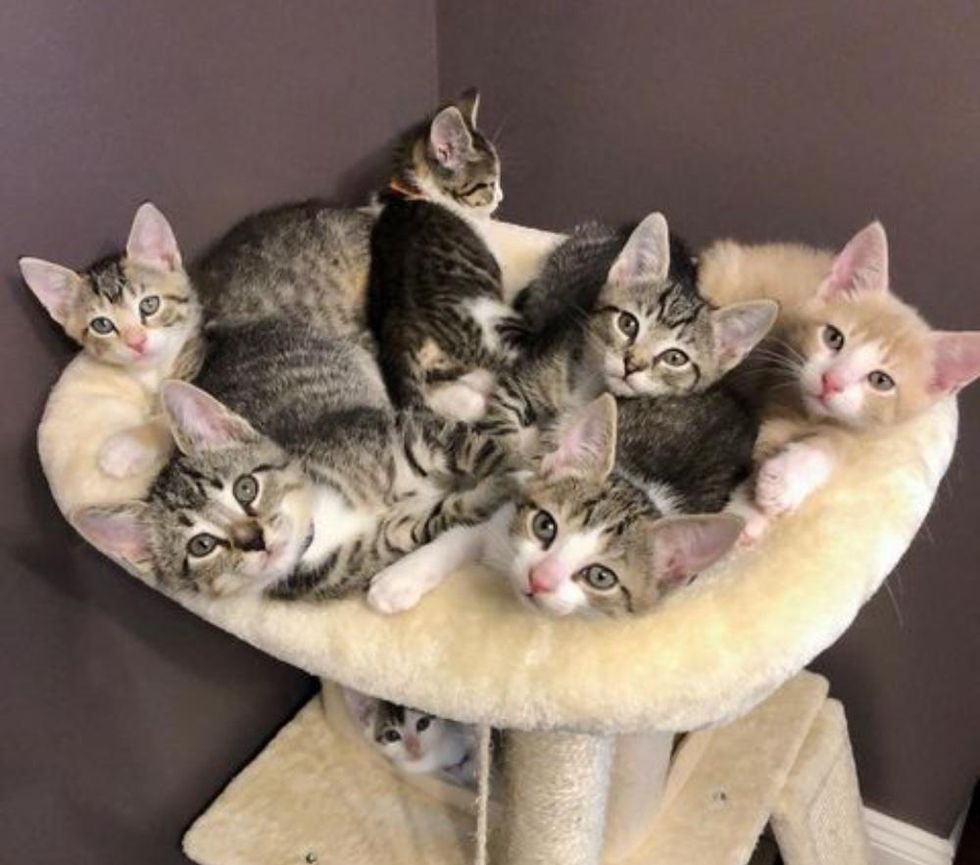 If the kittens weren't eating or scampering around the room, they were following Wilma, offering "assistance" as she tried to do some housekeeping.

Macy had the patience of a saint, but was glad to take some breathers away from the rambunctious ten. 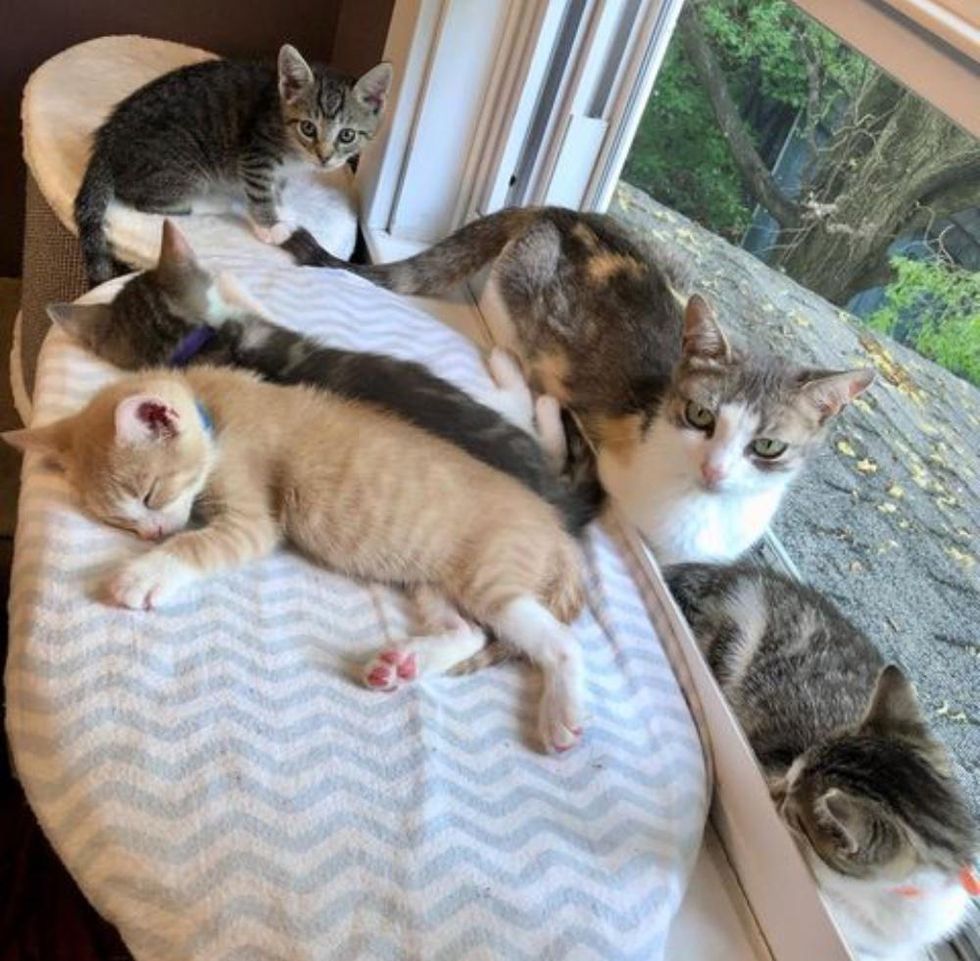 When the younglings were big enough to go on their own, they headed over to occupy Wilma's computer desk, and provided feline support through purrs and supervision for screen time.

Macy appreciated her own space and the peace and quiet. "She spent most of her time out on the floor napping, while her kittens were in a giant cuddle puddle napping elsewhere." 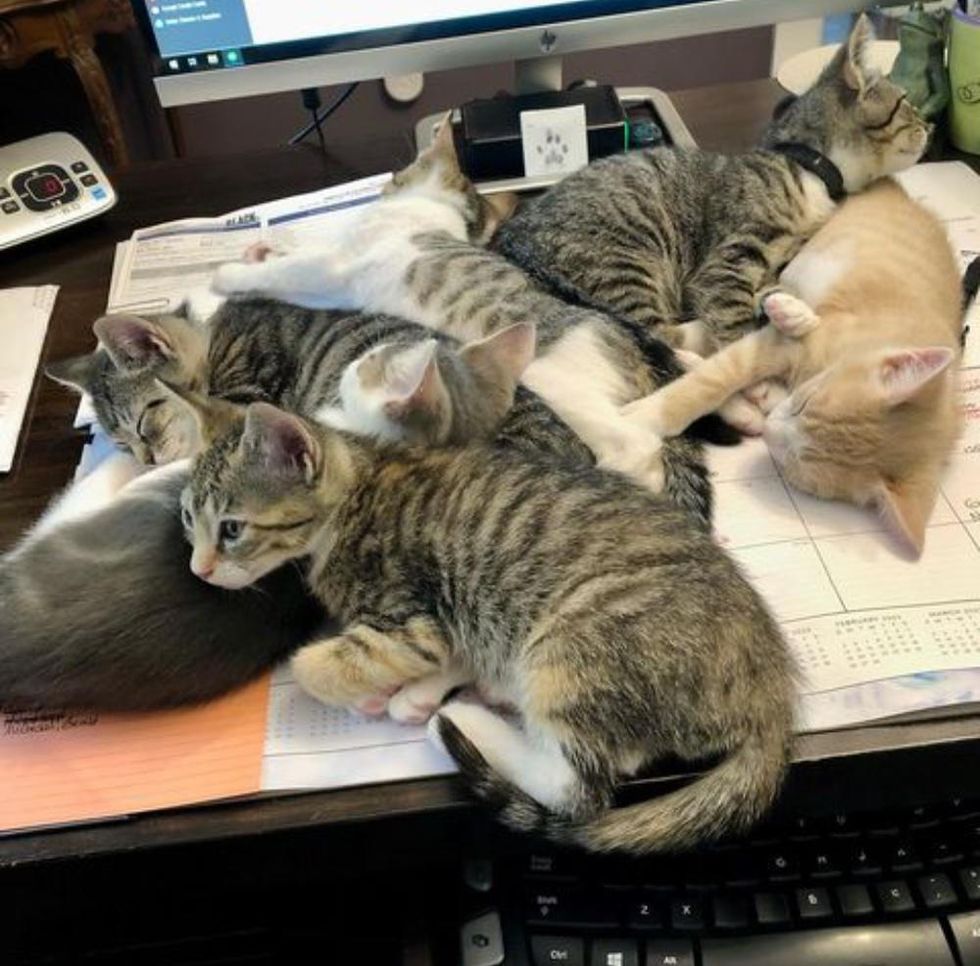 They took over the computer desk to nap@purrs_in_paradise

Even though the kittens were weaned, Macy didn't mind being swarmed by a horde of needy babies. The family of 11 recovered from some tummy issues and were then ready to be spayed and neutered.

Macy and her 10 kittens graduated from foster care two days ago, and some of them have already been adopted. "It's always difficult to say goodbye, but they're ready for their forever homes, and this opens up my home to new babies who need my help." 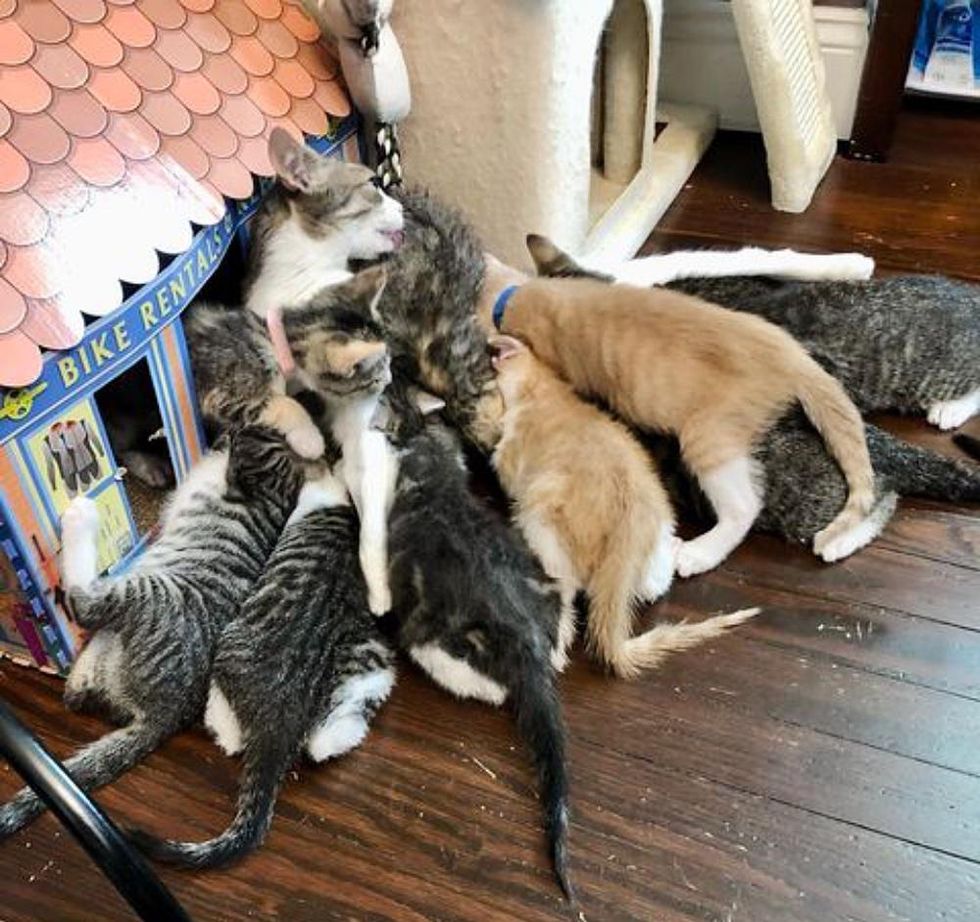 The former stray has come a long way and helped not only her own kittens but a second litter to thrive into happy, healthy young cats. She is so proud and can't wait to be the center of attention in a place of her own. 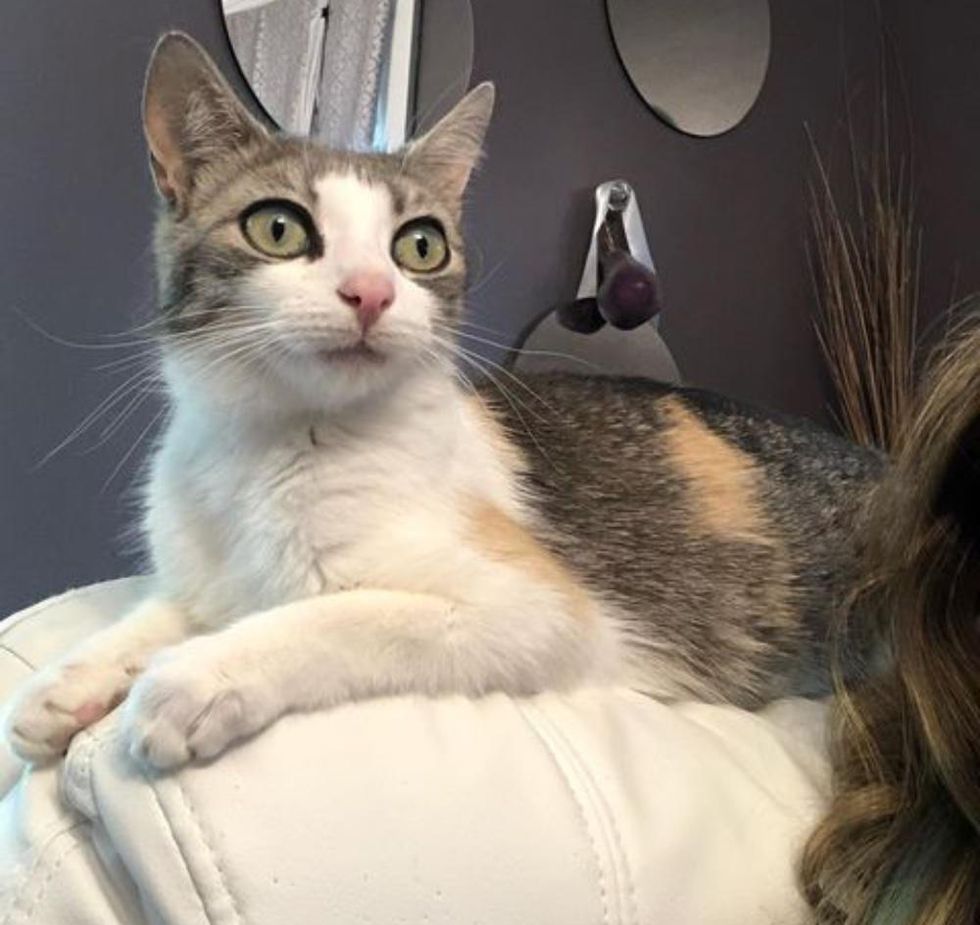 Macy is ready to find a place of her own@purrs_in_paradise

Related story: Cat Comes Back to the Couple Who Were Kind to Him, and Ready to Change His Life