Cat Finds Comfy Place After Roaming Outside for Years, She Has 2 Kitte - Captain Catnip

Cat Finds Comfy Place After Roaming Outside for Years, She Has 2 Kittens that No One Expected 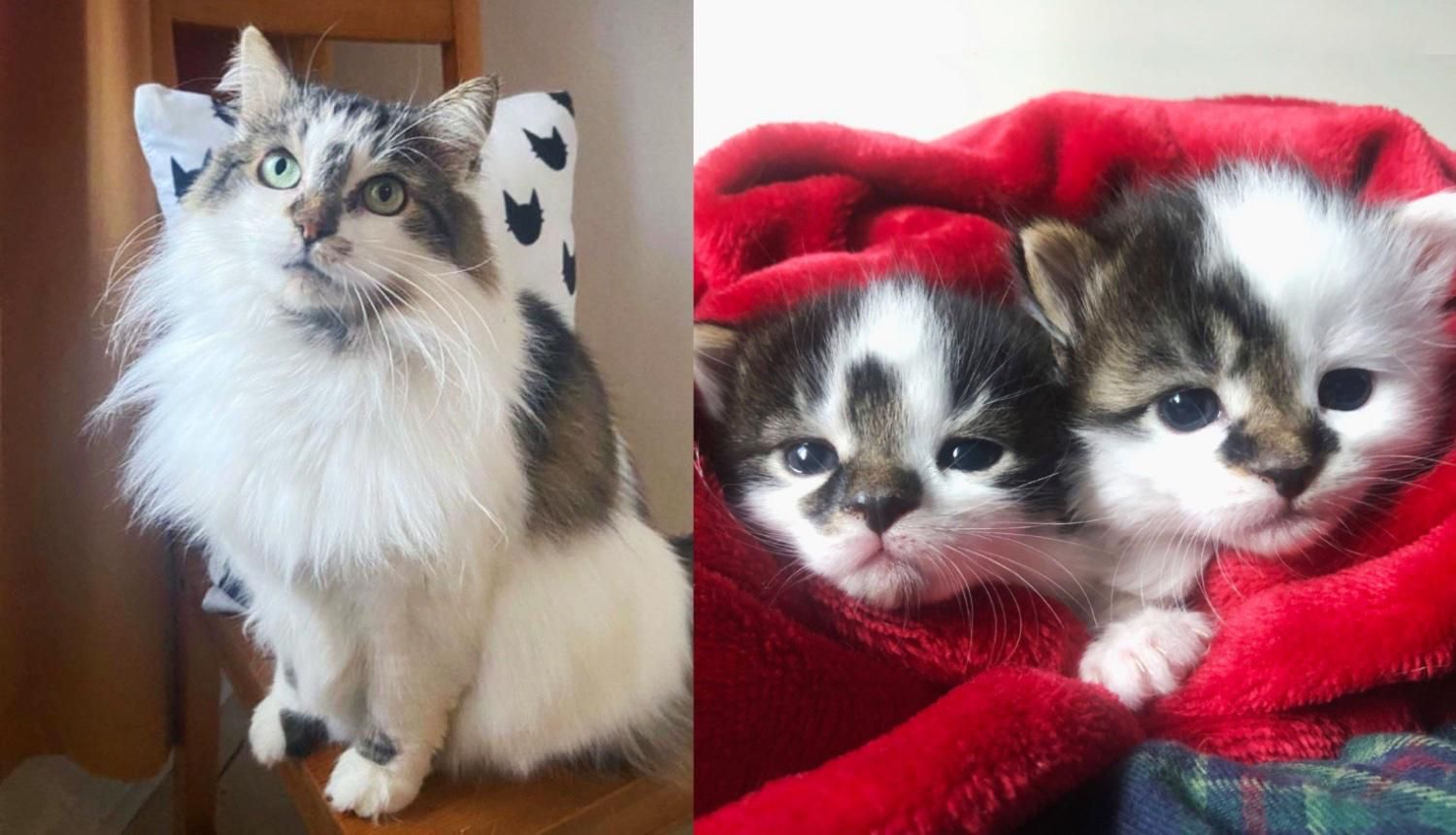 A cat found a comfy place after roaming outside for years. She had two kittens that no one expected. 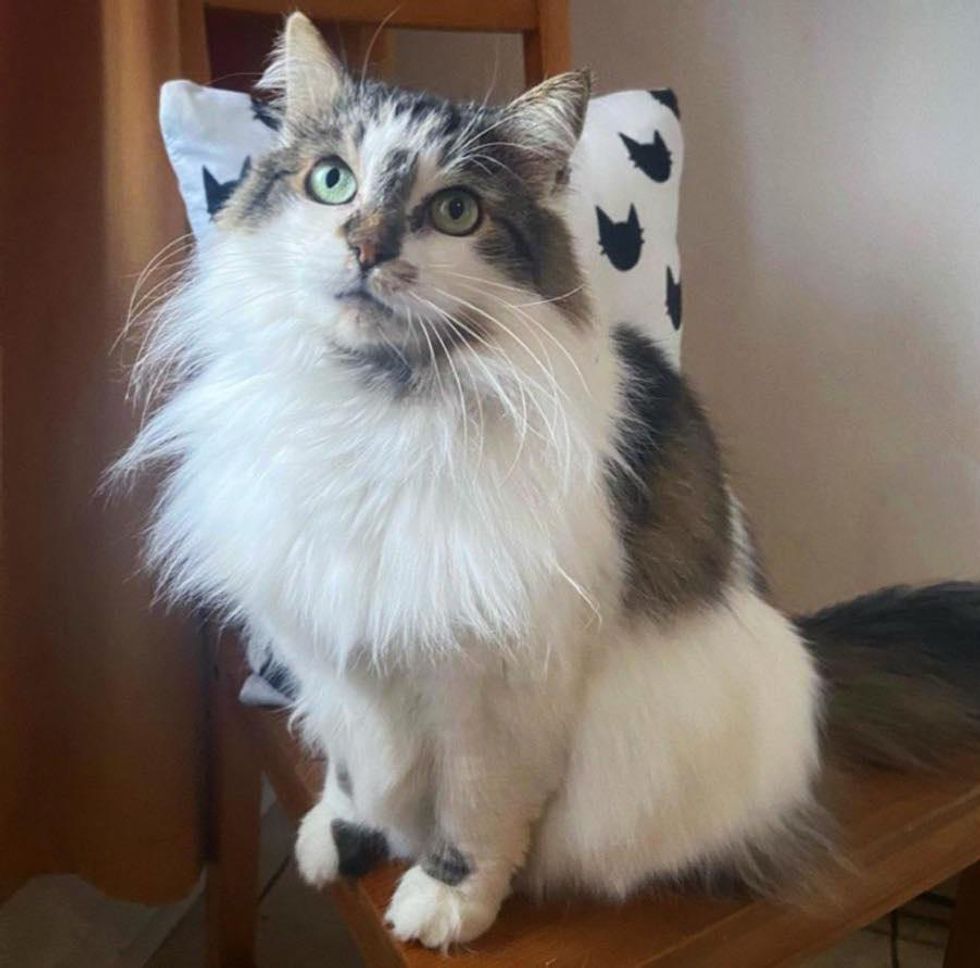 A scruffy, scrawny cat was spotted in a neighborhood of Montreal, Canada, in need of help. Right before she was found, a few good Samaritans were in the area trying to save another cat of the same age.

It was believed that they were sisters, but sadly, the other cat didn't make it. Maude who learned about the situation, made it her mission to get the remaining sister off the streets.

It was a difficult area for strays to live in, and with tremendous efforts, Maude caught the cat safely with a humane trap and brought her home. 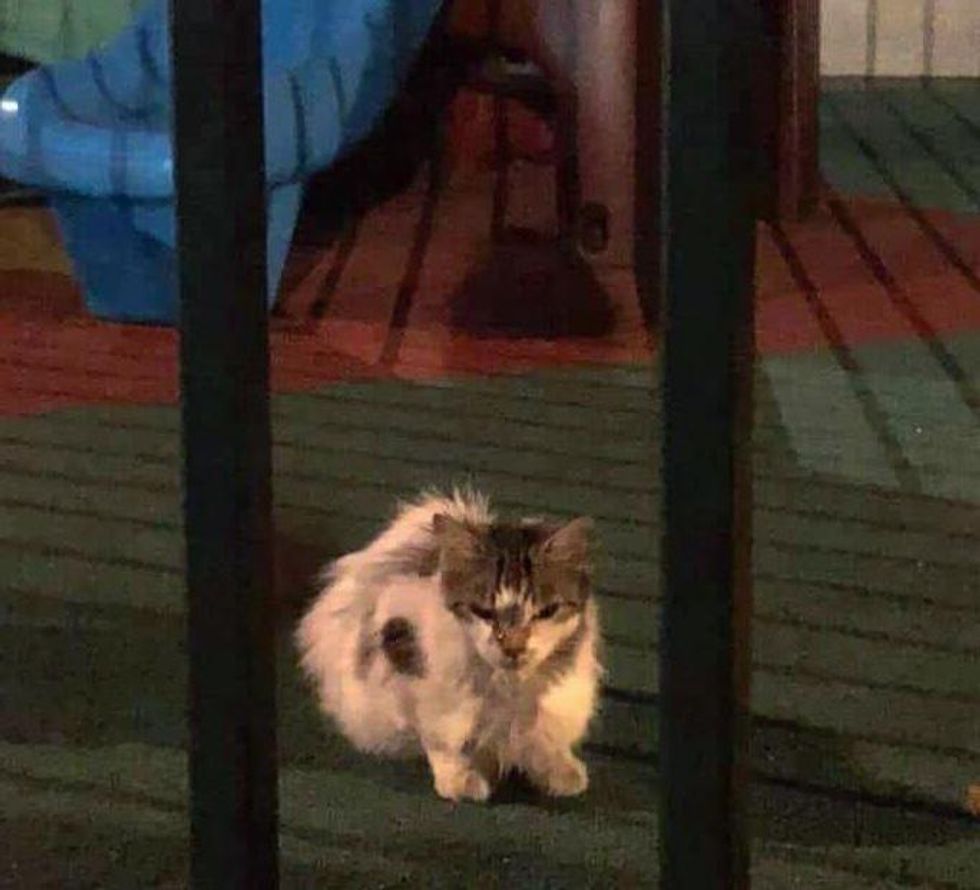 Mulan was found in a neighborhood, in poor shapeChatons Orphelins Montreal

She named the cat Mulan and reached out to her local rescue, Chatons Orphelins Montreal, for assistance. Mulan was just skin and bones and had an upper respiratory infection. That night, she had a roof over her head and plenty of food to fill her belly.

"She was so terrified of humans, spitting and hissing at the vet's office. The checkup was difficult as she kept jumping on the cupboards to escape," Celine Crom of Chatons Orphelins Montreal, shared with Love Meow. 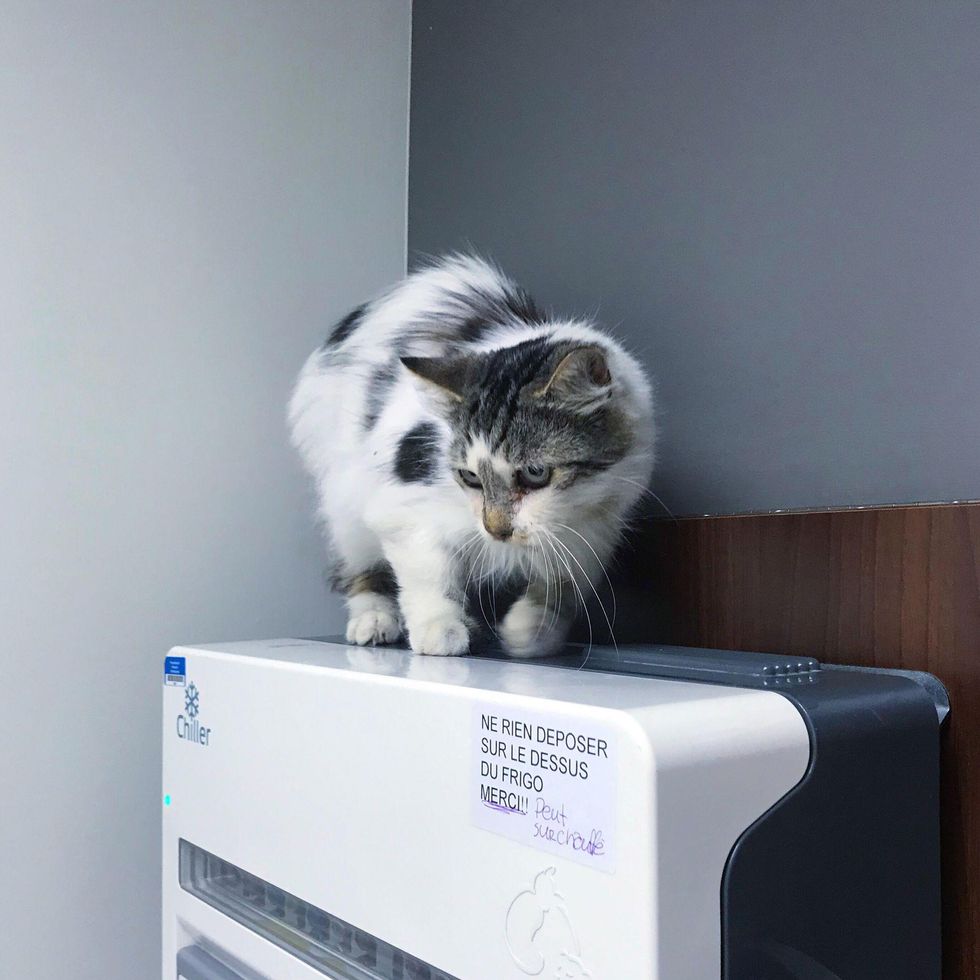 She was very scared at the vet's officeChatons Orphelins Montreal

With treatment and bountiful food, Mulan started to heal and put on weight. She began to allow people to approach her but was still very timid around them. When they took her back to the clinic for a follow-up, they were in for quite a surprise.

"We learned that she was pregnant, and her pregnancy was advanced. A few days later, Mulan went into labor and gave birth to her first baby." 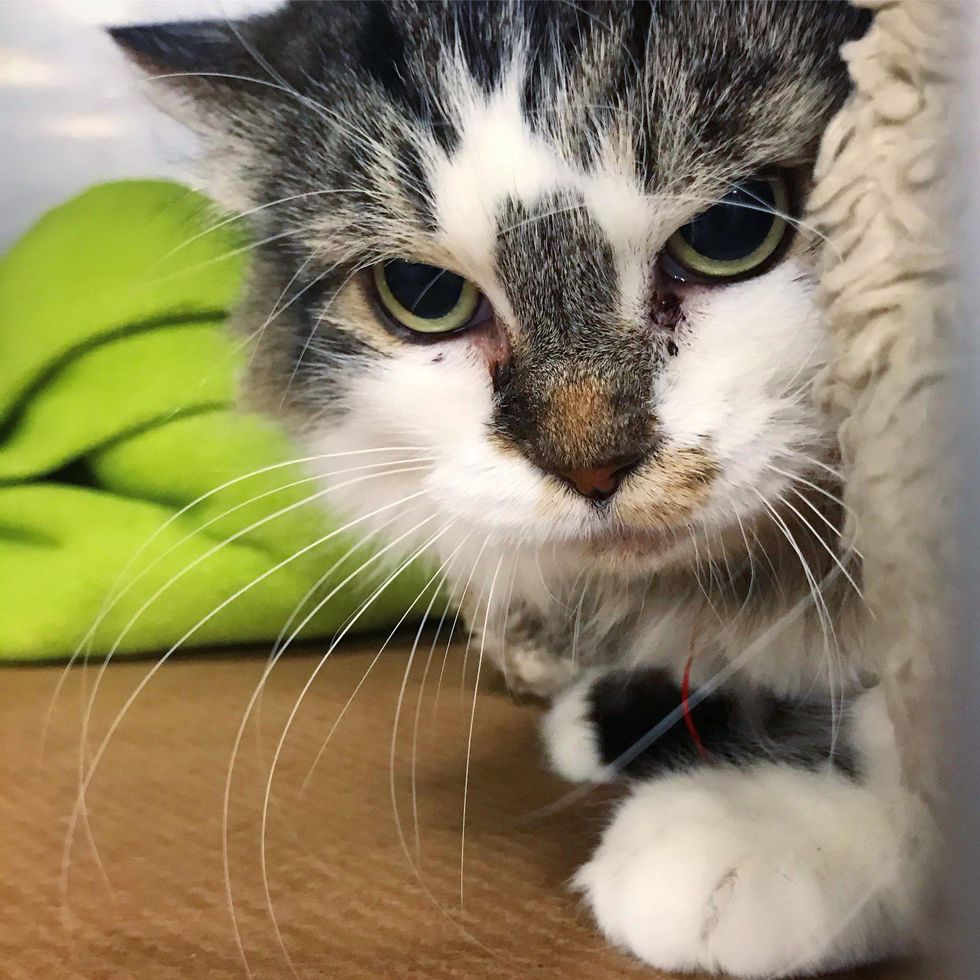 "She didn't seem to know what to do and just left her baby there. We put the kitten on her belly and he started nursing right away. She had a second one in the hours that followed, and we helped her find her mama's milk, too."

After 24 hours, Mulan's maternal instinct kicked in. She lay with her little mini-mes all day and night, feeding and caring for them. 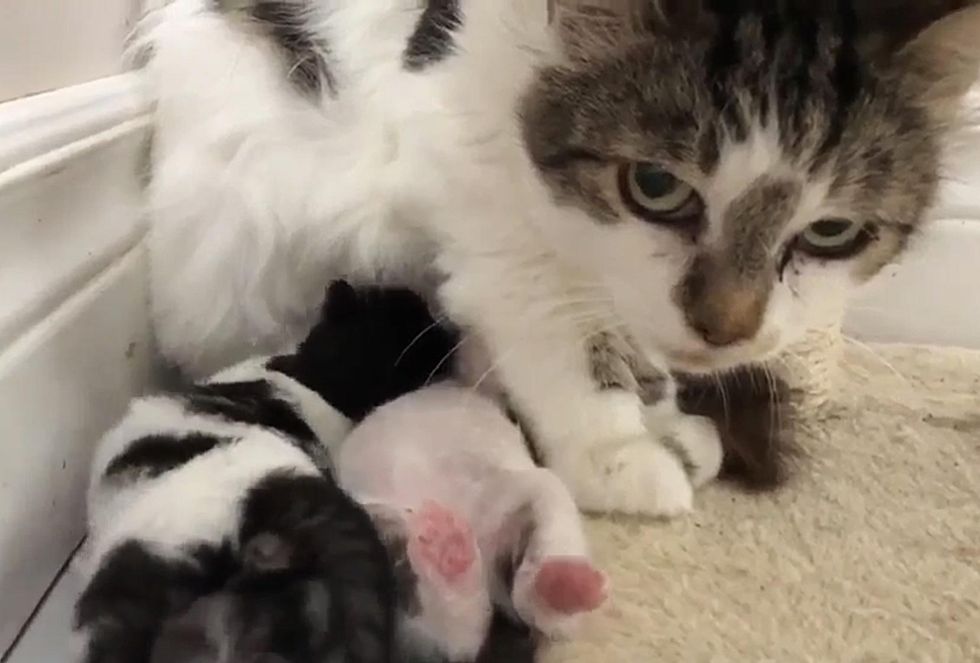 The kittens made excellent gains each day with their mom catering to their every need. Mulan slowly warmed up to her foster family when she realized that they meant good and were there to assist her.

She came out from her hideout as she gained courage. She let her humans handle her babies and was comfortable enough to walk a bit taller. 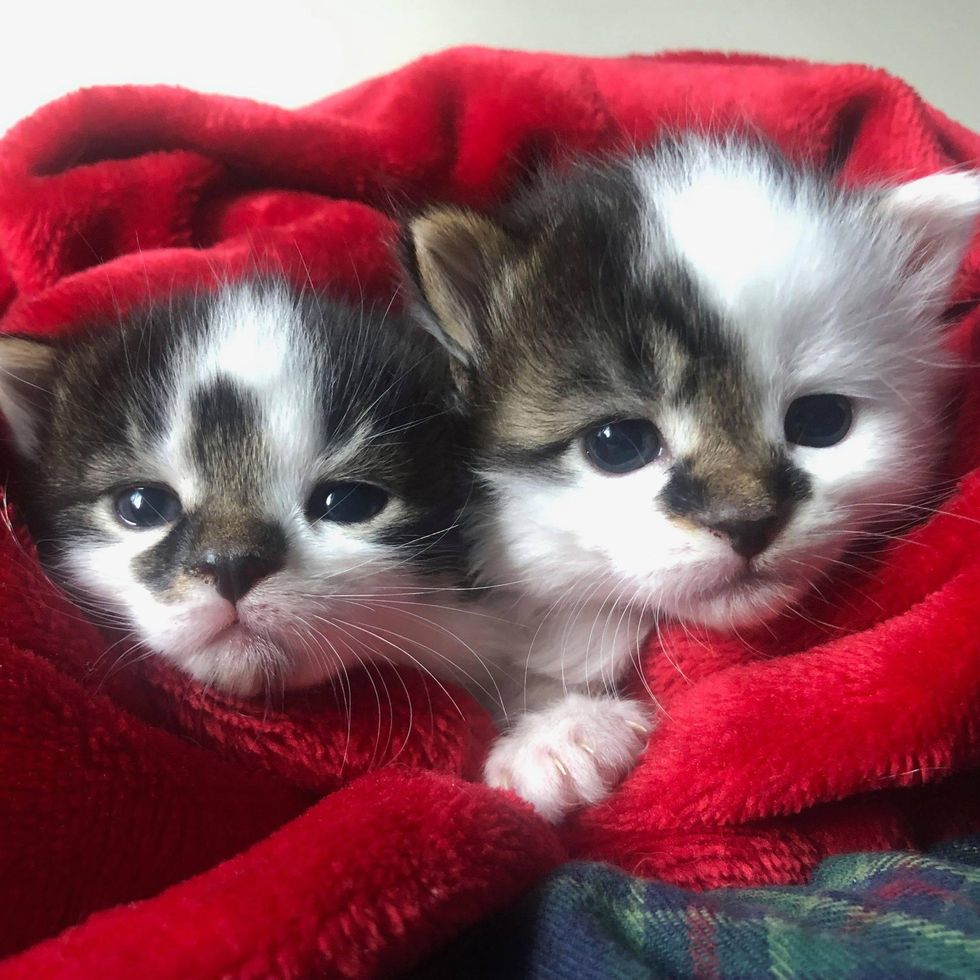 "The kittens, Mushu and Cri-Kee, never ran out of milk from their mother. Once they were weaned, they turned into sweet, playful and very cuddly kittens." 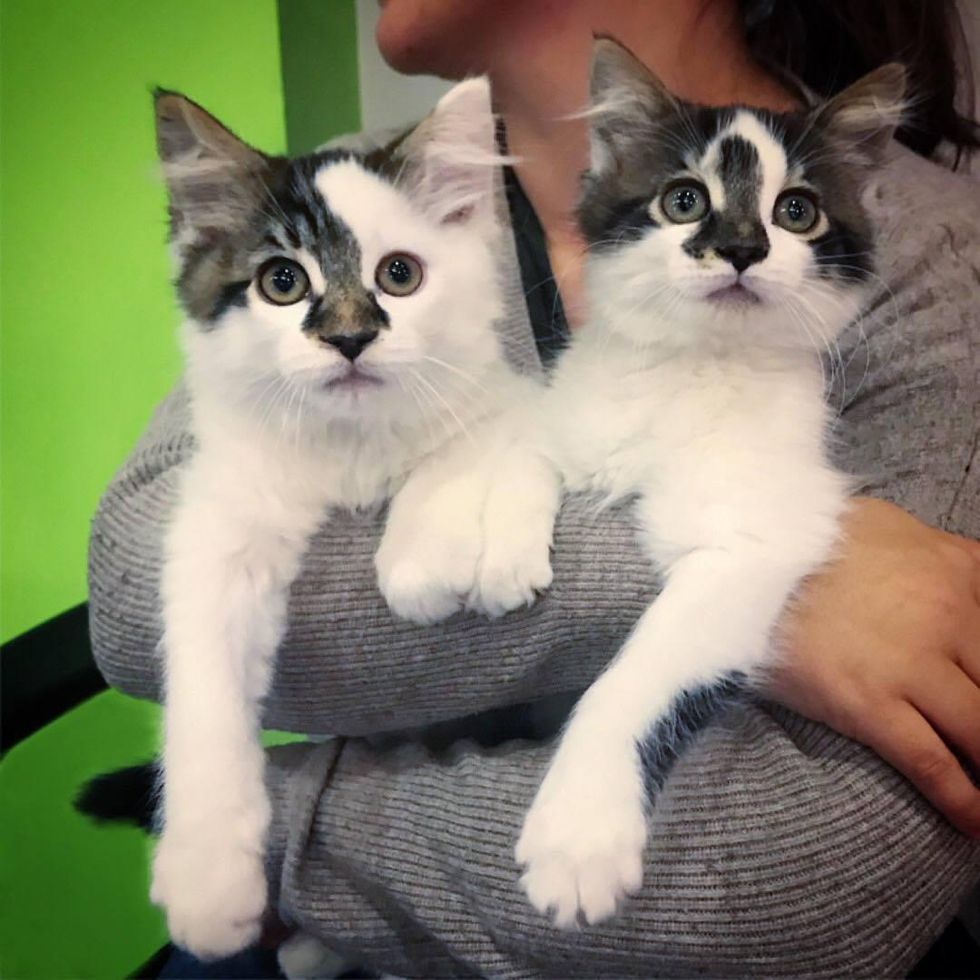 When the two younglings were big enough for adoption, they quickly found a forever home together.

Mulan was so relieved to never have to raise another litter, and could enjoy her peace and quiet. She mustered up her courage to explore and even seek attention from her people. 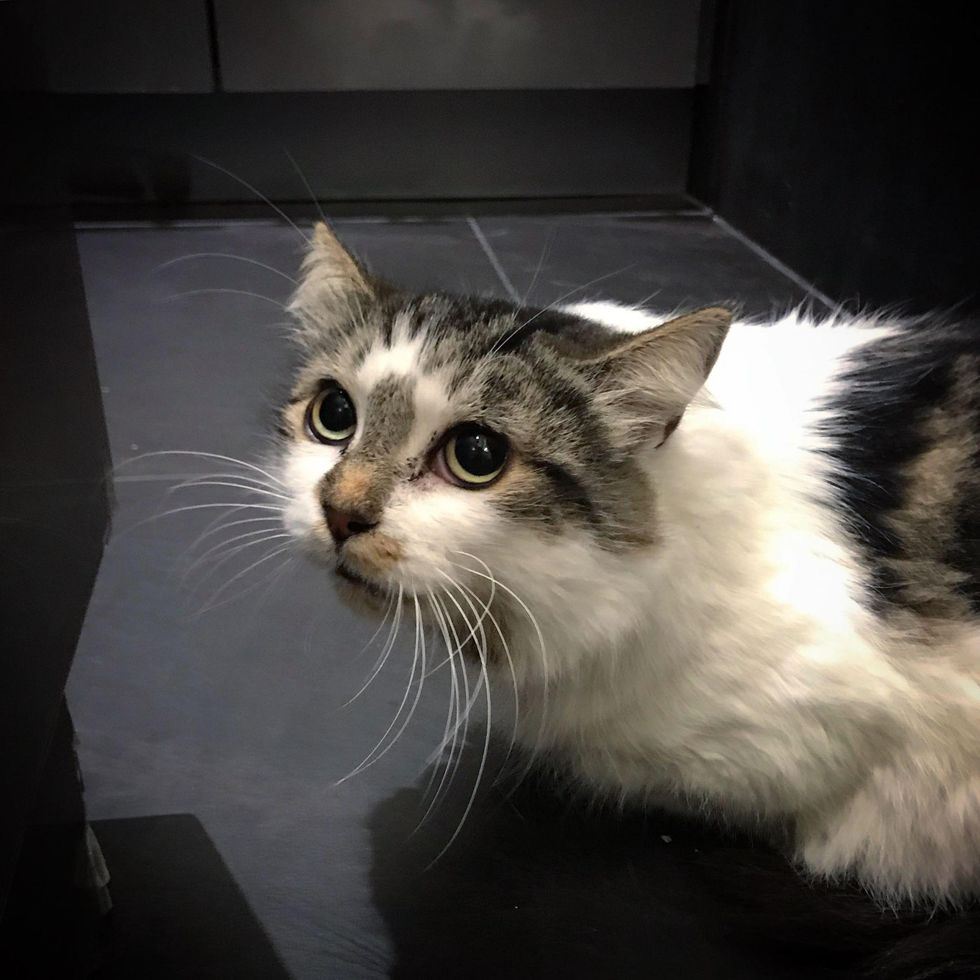 With lots of patience and encouragement, Mulan learned to play like a kitten again. She discovered her favorite pastime basking in the sun while watching the neighbors through the window. 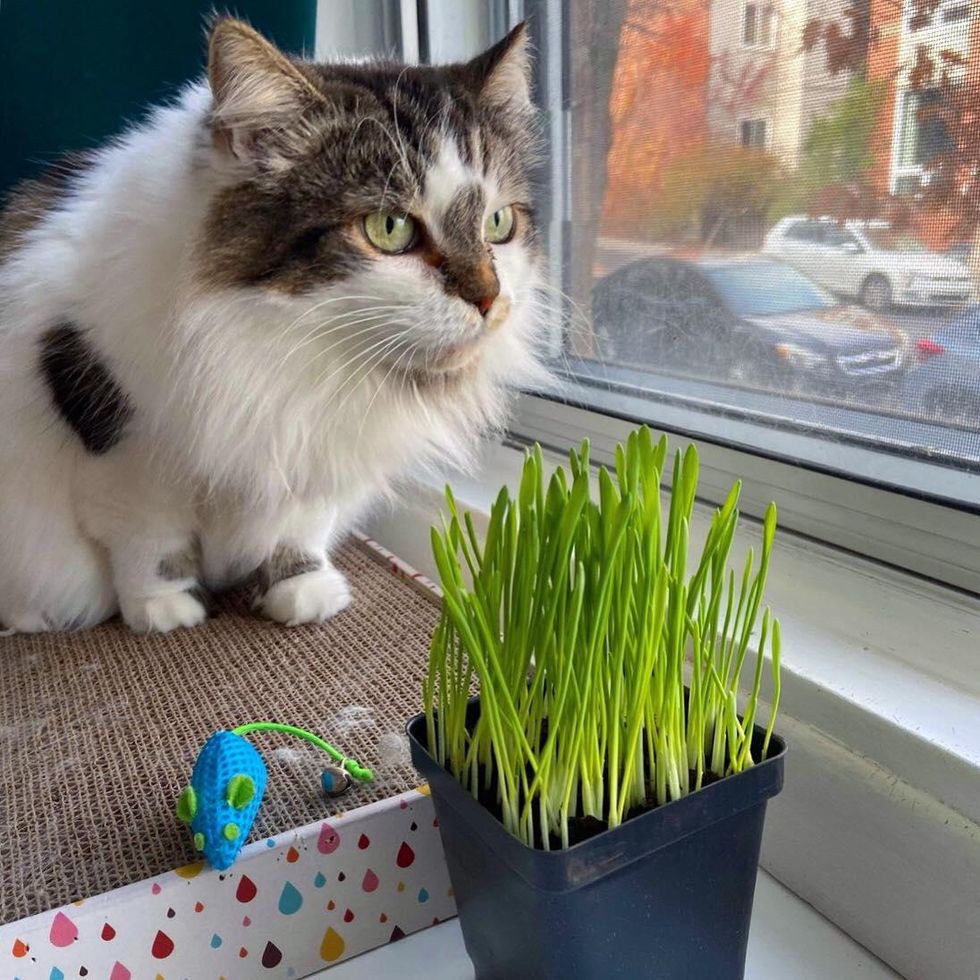 "She even came to sit next to us for treats. She was quiet and very observant. She liked to supervise us with her big eyes." 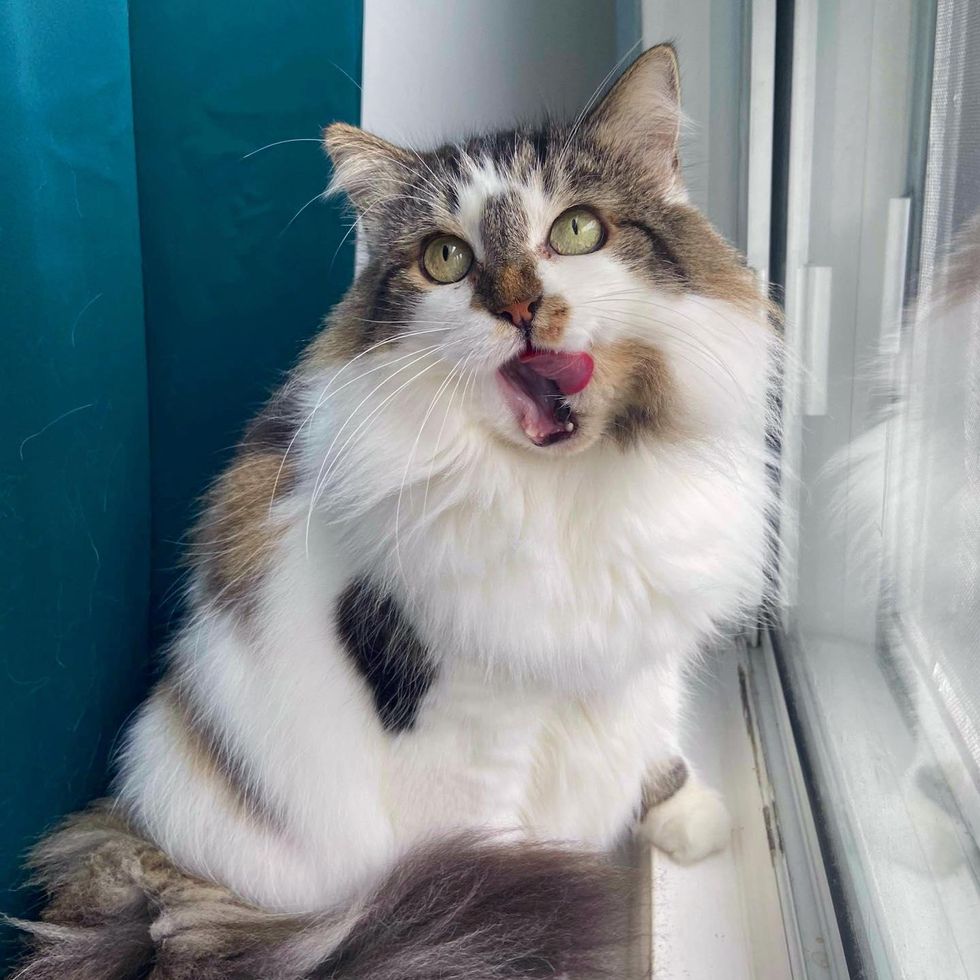 After surviving the streets, raising her last litter, and learning to trust, Mulan was finally ready for a place of her own.

A family fell head over heels for the sweet girl and were committed to giving her whatever she needed to live a happy, purr-filled life. 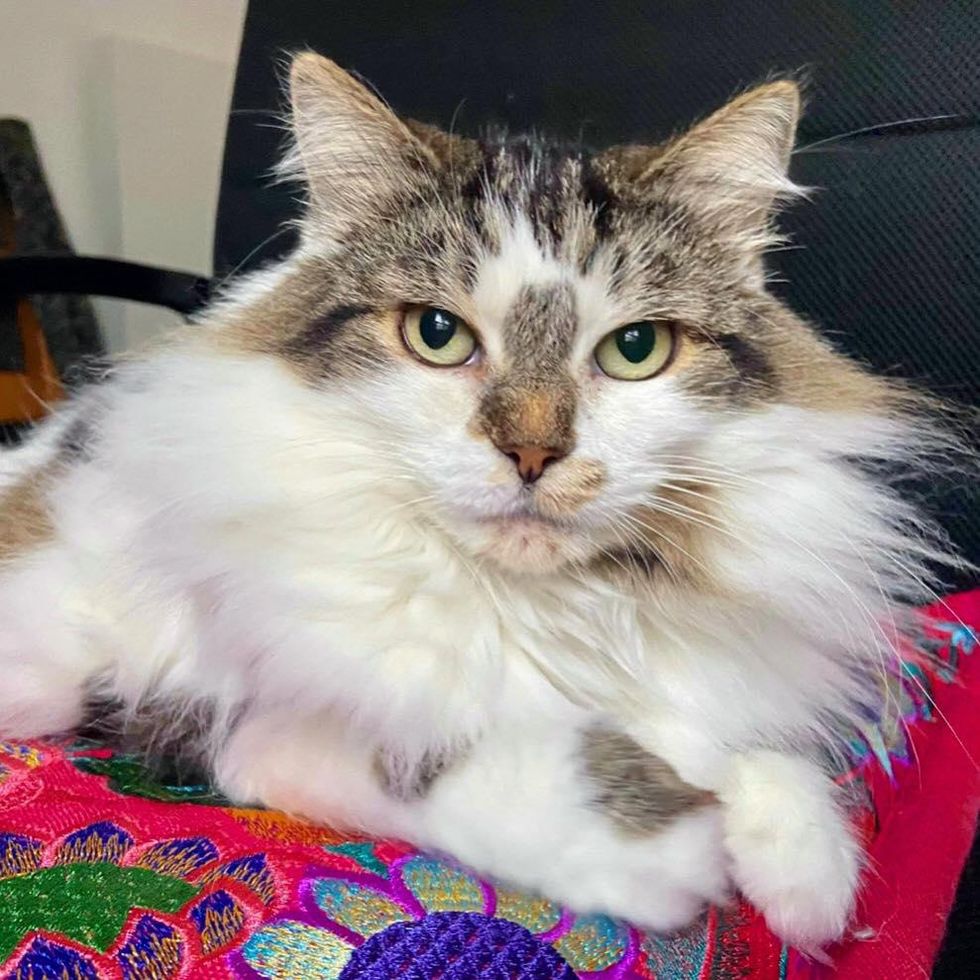 Mulan has grown in fluff and confidenceChatons Orphelins Montreal

"It's amazing how far she's come. When we first got her, she wouldn't let anyone near her, let alone touch her. After a few months of socialization, she blossomed into a happy, playful, affectionate cat." 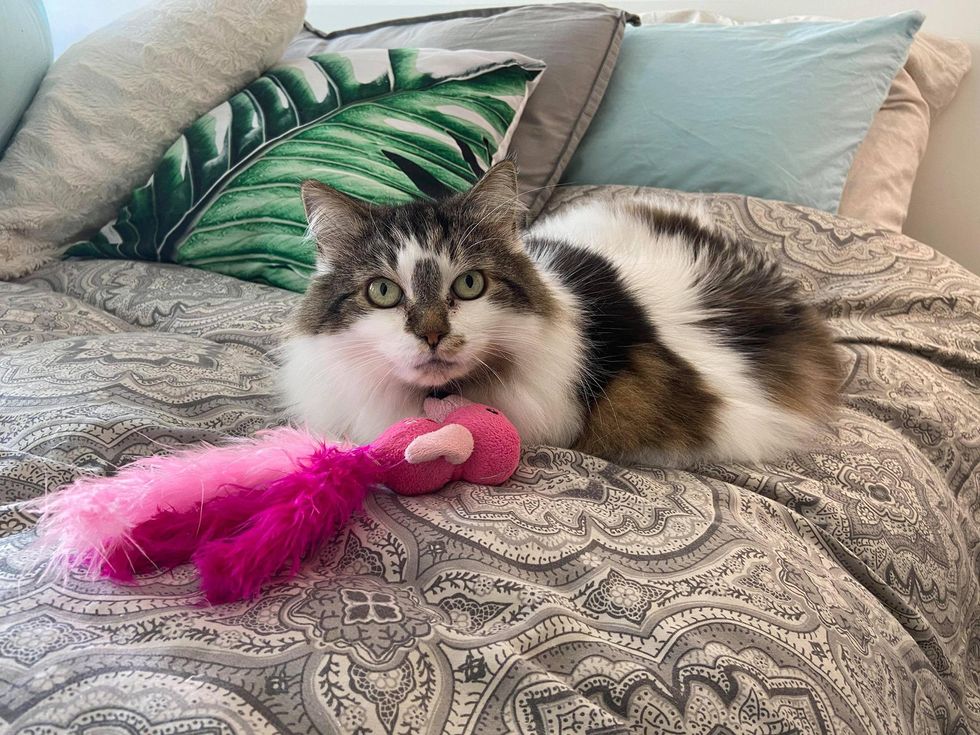 Related story: Orange Kitten Hops the Fence to Join Litter of Smaller Kittens and Decides to Help Raise Them